The Jeff's Guitar And Steel Blog

Lots Of Site Improvements And Many New Guitar And Pedal Steel Tutorials!!!
Submitted on Thursday, November 3rd, 2016 - 11:59
Hard at Work With Site Upgrades at Rady Guide HQ:
New Search Bar and Newest Videos Option: I wanted to let you know we’ve been hard at work at Rady Guide HQ. We had some quality feedback on how it was hard to find songs on the site now that there is so much material. We’ve created a Search Bar on the home page that will take you to your desired song, artist or lesson within seriously less than a second. Quite possibly the fastest “Search Bar” in American guitar website history.
We’ve also made it possible to click on all the titles in the “Newest Lessons and Videos” list on the home page, as well as the list of the “Most Popular Videos and Lessons”. Clicking on a title will take you to where the videos are located within the site’s database so you can consume all digital media immediately!
New Comments Section: Finally, we’ve made it so that you can comment on videos in case you want feedback, need to clarify questions, or have other helpful observations. The new comments section also gives you the ability to upload your own youtube video of yourself playing the song so that members or myself can help give you critiques or suggestions. Or you can just use the comments section to give pithy observations on my hairstyle and hilarious jokes or share Eastern European goulash recipes. I mean, I don’t care, just be cool and don’t be cruel or mean, and for the love of god please don’t spam it with Vietnamese energy drink advertisements and cat pictures.
If you would like to comment you need to be a paid member. I hate to do that, but next thing you know if I don’t, I have Russian KGB infiltrating my site and spamming the comments with Vietnamese energy drink advertisements, and hilarious pictures of cats hanging from trees. So, forgive.
New Guitar Tutorials!
Traveller by Chris Stapleton (Finger-style) – This is a classic, from Mr. Stapleton’s huge debut solo album. This features some challenging syncopated rhythms and some nice Bm7 and Em9 chord voicings.
Little Red Rooster by Howlin’ Wolf  (Slide)- This is a great one for approaching the open G tuning. With some simple slide licks across a more or less 12 bar blues.
Gimme Shelter by the Rolling Stones (Rock and Roll)- Another Stones’ hit featuring Keith Richards innovate guitar work within the open G tuning. This one features all of the rhythm parts plus the intro which uses a particular right hand finger-style which involves holding your pick between your strumming hand’s index and middle fingers.
What is and What Should Never Be by Led Zeppelin (Rock and Roll) – Time to get the led out with this timeless masterpiece featuring the A13 and E9 chord plus the heavy hitting chorus and intro featuring some cool two string riffs and barre chords, plus some cool rhythmic stuff.
Say It Ain’t So by Weezer (Rock and Roll)- An acoustic arrangement that gives some insight onto some Jimi Hendrix like riffs featuring barre chords and some double stop melodies.
Jesus, etc. by Wilco (Trailblazer)– An indie rock classic, this song almost has a “hipster-bossa-nova” like feel to it, this is great one to try out at the campfire, neighborhood wine and cheese party, or high school wrestling match?
New Pedal Steel Tutorials!
100 Years From Now Background/Pads by Sneaky Pete (Journeyman)– This one is a great example of Sneaky’s steel work with some crazy licks using 6th intevals over the V chord, plus some super cool psychedelic licks over a long chord progression. I transcribed this off of the Burrito Bros, “Authorized Bootleg” record, in which Sneaky is turned way up and is totally in his element.
You’re Running Wild Solo By Sonny Garrish (Trailblazer)- This was kind of an out of left field request. This version is sung by Nicollette Larsen and Linda Ronstandt. Nicollete Larsen was probably best known for the adult contemporary hit of “Lotta Love” in the 70’s. Anyway she knocks it out of the park, so does Sonny with one of the most astounding V chord licks I’ve ever heard in my life, I’m serious! So awesome that I’ve dubbed his lick, “The Swedish Massage”
Killin Time Verse Pads by Jeff Petersen (Journeyman)- Another nice, not too challenging example of some nice country licks over some 1-4-5 chords in the key of G. These feature some cool chromaticisms  and fun two note harmony licks.
Killin Time Chorus Pads by Jeff Petersen (Journeyman)- This lesson features a great harmonized lick you can use in any major chord closed position!
I hope you get to chance to check out all the new rad features and tutorials!
Thanks for your support!
Jeff

(back to all blog posts) 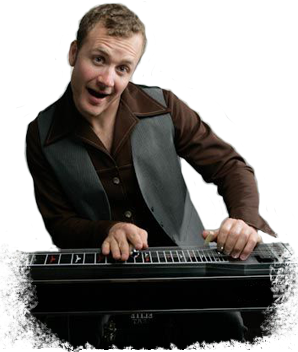